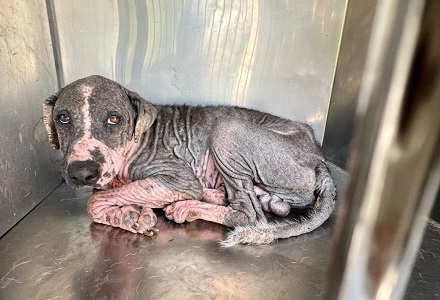 Type of Donation
8 Abandoned Dogs from San Jacinto County
They heard the door shut behind them and that was it.

They didn't know it yet but they had been abandoned, and were going to have to learn to scrap and struggle to get by.

The pangs of hunger, the constant itching due to the many parasites that covered them over the days, and the dry mouths of a dog who hasn't had water in a couple days plagued them.

Why did they leave us? What did we do wrong? They were as loyal as a dog could be, but after a year their people still had not come back for them.

Until one day they heard the creak of the door being pushed open, and in walked Sam Houston - Precinct 3 Constables Office-San Jacinto County and Houston Humane Society. They were loaded into a van that was nice and cool, and immediately began to lap up the water they were given before settling into the kennels for the ride to safety.

These babies are safe now, but getting them healed up, the enrichment they will need to transition back into being a regular doggo, and feeding and housing them will be a task too great for us to tackle on our own.

We ask that you find it in your heart to give to these babies & the care that will come in rehabilitating them.
Built with Kalibrate CMS .NET Framework