I’ve been meaning to write for some time. My heart breaks every time I see that someone has surrendered a senior pet — or a plea for a bonded pair to stay together.

My world changed in April of 2015. I saw a featured pup, Marlei, on your Facebook page. I wasn’t looking to adopt another dog at that time, but the chunky girl and her amazing smile stole my heart. I came in to meet this girl one day after work — and I was seriously hoping she might have been adopted but the time I arrived. She was still there. The moment I met her, I wanted to take her home after an immediate barrage of kisses from this 8-year-old pup. One of the staff members told me that Marlei’s brother, Ziggy, had been adopted a few days before. Phew, I thought — I dodged that bullet and wouldn’t have to feel badly for separating them and just taking Marlei home.

I filled out my adoption application that day, but still want guarantees that she would be coming home with me. She had recently been groomed and liking pretty sharp because she was featured on a local TV program to create some buzz for her. I was in kind and needles for days worried that there would be so many applicants to take this precious girl home. A few days later, I got my call. Nervously, I answered. I had been approved to be Marlei’s adopted dad. I asked how many other applications had been submitted — it was just me. I was stunned, but secretly thrilled.

Marlei came home with me a few days later and quickly bonded to my 10-year-old Lhasa mix. Two pups in the house completed my home. And then I got a call from the Houston Humane Society. “Remember we told you that Marlei’s brother had been adopted? He just returned because it didn’t work out. We really think they need to be together. Would you please come and meet him? We’ll waive half the adoption fee.”

Whoa. What a spot to put a guy in. I only wanted one new pup in the home. But the thought of these two pups, having spent eight years together and suddenly being separated, was ripping my heart out. I arrived back at HHS a couple days later and was smitten. (I didn’t tell Marlei what I was up to — I had to keep this mission a secret). Ziggy easily showered me with more kisses and tail wags than I deserved. His matted, overweight, and gritty-haired body again broke my heart. How could someone let a pair of the sweetest pups become so unruly looking. And then I learned they had been adopted together as puppies in 2007 and surrendered as a pair TWO TIMES after their first adoption. Absolutely criminal. I was owner number three
and vowed to the two of them they would live out the remainder of their lives together.

It’s been five years since Ziggy and Marlei (the twins)  joined my home. Today, I have a home full of senior pups and more love than I deserve.  The twins just celebrated their 13th birthdays, and my Lhasa mix is still here, soon to turn 16. Ziggy and Marlei continue to be shadows to each other. Marlei is a mother hen. She has an uncanny instinct to know when and where her brother is hurting. If there’s an ear issue, she licks his ear to soothe him. If his arthritic leg is acting up, she licks it to soothe him. Bonded pups — especially litter mates who have lived several years together, should always be adopted out together. They absolutely need each other, and that they were once separated was a crime.

I work long days and feel bad that I’m not able to spend all the time I’d like with these kids, but they are well- loved and cared for. Marlei has had two surgeries for bowel instructions, and glaucoma claimed one of her eyes earlier this year. But they get nothing but the beat care I can provide. They deserve the best quality of life I can offer.

When my mother passed away three years ago, all three pups stayed with a sitter at my home in Houston. When I arrived back home from out of state, I laid in bed that night and each of those three pups knew something had changed in my world — and that I needed them a little more that night. As I lay on my left side, Marlei and my Lhasa, Honey, snuggled up against my backside, and Ziggy situated himself against my stomach and chest. I couldn’t move an inch if I wanted to because of this tight embrace they held me in. The entire night, nobody moved — these intuitive creatures absolutely knew the beat healing gift to give me that night.

I’m writing this to say a huge thank you. HHS has given me more than I deserve with these amazing pups. Never ever shy away from suggesting to people that they adopt a senior pup or a bonded pair.  A lot of my get-up-and-go freedom changed when I brought two more dogs into my home. I can’t stay away for long stretches, and overnight excursions are limited because of boarding or pet sitter issues. But every sacrifice has been worth it.

The pups moved with me to my home state of Pennsylvania a little more than a year ago. The 1,200-mile drive was quite an adventure, but all of these Houston-born pups are loving their new lives here in the north. Snow has been a wonderful adventure for them. Apparently it’s tasty stuff — they often can decide between relieving themselves or snacking on this freshly fallen treat from the sky.

This Giving Tuesday, I committed to make a monthly contribution to the HHS. Every pup you take in reserves a chance like the ones I took on Ziggy and Marlei.

Attached is my favorite photo of this amazing pair of pups. (Marlei on the left and Ziggy on the right). 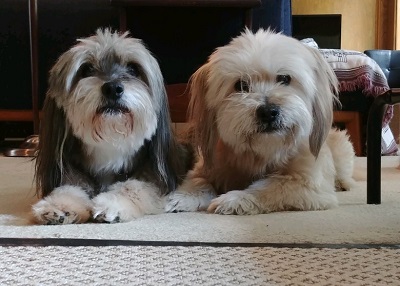