When I adopted Ron I came in and told the lady who was working that I didn’t want to go look at the dogs.  It would ruin my day to see so many dogs needing homes.  Instead, I told her what qualities I was looking for, described my home and told her whatever dog she brought to me that best fit those criteria would be the one that I would be taking home.  She brought out Ron (formerly Ronald), and it was a perfect match.  Ron was heartworm positive when I got him, but we got him treated, and he has been happy ever since.  That was in 2012.  A few years later I decided that Ron needed some company to stave off loneliness while I was at work.  I decided that this time I would have to make the choice because I knew what would be best for Ron.  I found Lulu (formerly Mouse), who had just recently been surrendered.  I was able to bring her home once she was spayed, and she and Ron have been thick as thieves ever since. 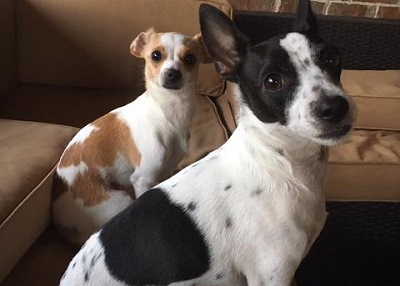